From For Honor Wiki
Jump to: navigation, search 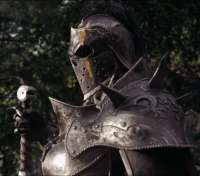 Apollyon is the main warden from the game For Honor. She is a war thirsty maniac who seeks only one thing, war. She is the final boss in which you have to defeat her. (She's very hard)

Story: When she was a little girl, a war was going on between the iron leagon and the vikings and and in a small little village a lawbringer shows his presence to this village and he is a special type of law bringer, he got to choose if he could put troops on patrol and protect the small weak village. The lawbringer decided, they were not worthy of protection.....

After the lawbringer left a few days later, the village was attacked by the vikings and they were slaughtered like chickens! A few have survived this chaotic collision and one of them, was Apollyon!

She later got into crime and whilst doing crime she has learnt combat from there and then she eventually joined an army and gained experience to become a warden. (Not by order) She later on found this law bringer, had him publicly executed and she later took the metal armor from this lawbringer and took it to a blacksmith and she had it reforged into the armor you see her wear in the series.

This article is a stub. You can help For Honor Wiki by expanding it.